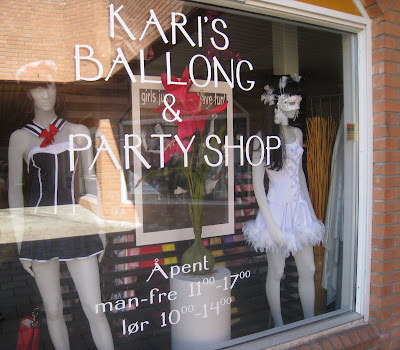 Not long ago, there was a derby in football between Mjøndalen's team and the team in Drammen, a city nearby. Because of the match, Mjøndalen was mentioned in the evening's sports news, and the viewers were given a small guided tour of the village. I didn't see it, but one of my classmates did, and she pointed out a few of Mjøndalen's rather special shops. Like this one, a shop I didn't even know about, Kari's balloon & party shop. As you can see in the photo, not that many balloons on display. Reason for this, they also sell corsets and underwear.. Very versatile!
Posted by Adelheid at 22:30