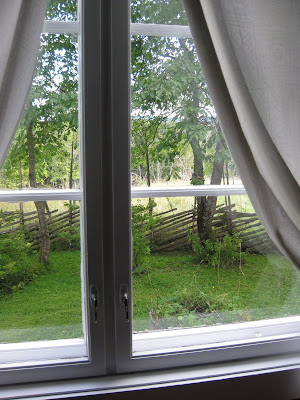 The old wooden fence in today's photo is called "skigard" in norwegian. I think it can be translated into "lathe fence" in english?! Today's photo is taken from inside an old house on a croft in the forest. The croft is called Nikkerud and belongs to the farm Skramnes in Mjøndalen, the same farm that produces and sells the honey I wrote about in this post. The lathe fence has been outdated by the new and more modern fences of steel wire and wire mesh, yet, as with many things that was modern decades ago, only to come back and be popular once more, some have started to build the fences again. Stanley Jacobsen, a former norwegian artist and writer of folksongs, might argue that the lathe fence never went out of fashion. He is famous for his song "Skigardsvise" where he compares the lathe fence to prejudice, segregation or barriers everyone carries within themselves. "Kva er ein skigard? Ein skigard er så mange rare ting: Ei rad med stokkar, sett som eit gjerde, eller eit stengsel i ditt eige sinn. Ein gamal fordom, eit raseskille, hat og misunning, eller aversjon." Listen to his song here
Posted by Adelheid at 08:23