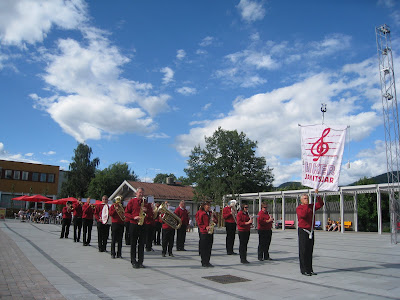 Previously known as the Veteran Band, I present to you Eiker Janitsjar! It took a few earlier school band members only 17 days to organise and found this band in 1994. Since then the band has grown steadily and has today 40 playing members, being Nedre Eiker largest amateur band. This year is no special centenary year for the band, but on today's photo they were performing on Mjøndalen sports club's (MIF, in Nedre Eiker) hundred year anniversary in August!
Posted by Adelheid at 19:33