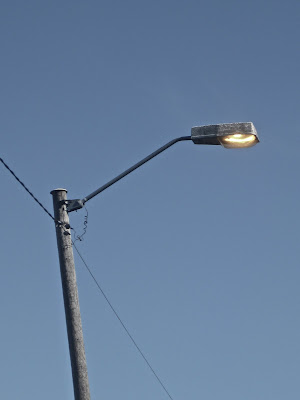 From the 1880s, electric light had existed at the pulp mill in Vestfossen. The electricity was made through steam turbines. From 1907-1910, the pulp mill and the town Vestfossen took the step into the electricity era, by building what today is known as "Gamle Vestfossen Kraftstasjon" (Old Vestfossen Power Station).
With what they called the white coal, the factory could save lots of money (as much as 40 øre (about 0.068 USD) per tonne of coal). On the site of a burned down factory, the pulp mill built the small power station. It had four generators, wich could produce about 260 hp. Now, Vestfossen's population saw the possibilites to get light themselves. One of the town's retailers, L.G Dæhlin went directly to the factory manager and asked, and the factory was interested in supplying power to the town too, both as street lights and electricity to private homes. While Nedre Eiker looked the other way, and became customers of Drammen's Electricity Works, the locals in Vestfossen chose to gamble on the local cornerstone business. In the fall of 1910, it was put up 31 street lights, each at 65 watts, and so the light came to Vestfossen (link to source).
Posted by Adelheid at 23:31