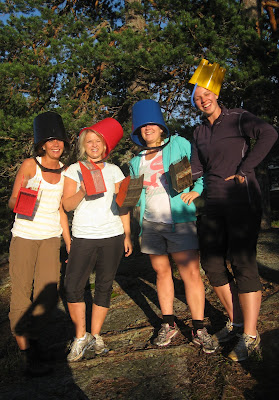 In Norwegian we have the phrase "helt på bærtur." It means that if someone do not understand something, do something wrong, misunderstand or is completely lost, that someone is helt på bærtur. At the same time, someone can be "på bærtur," literally speaking, if they are out in the forest or in the mountains to pick berries. So to the point: Today some friends and I were på bærtur, at the same time we were helt på bærtur. We were supposed to pick blueberries, but we were obviously too late, out of season, as there were no blueberries left. We had to find something else to do with our ten-litre buckets..
Posted by Adelheid at 23:35