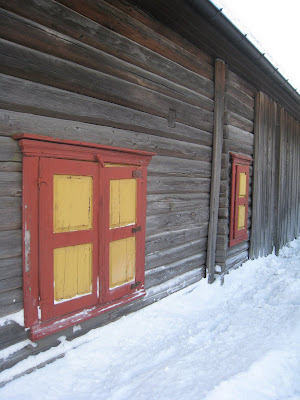 Suffering from slight writer's block I was struggling to come up with a title (and text) for this photo. For long, I couldn't even remember what these red and yellow thingamyjiggy's in front of the windows are called in norwegian, but when I remembered I could easily find the english word for it: shutters. With that, my mind wandered far away from colourful shutters in Hokksund, to two choreographers in the Netherlands, Paul Lightfoot and Sol Lèon. In 2009, my mother and I saw a ballet performance by Lightfoot and Lèon in the Opera House in Oslo. The performance was called "4x Paul Lightfoot & Sol Lèon, and "Shutters Shut" was one of the four dance pieces, performed to a recording of Gertrude Stein's poem "If I told him: A completed portrait of Picasso." The only thing I remeber from Lightfoot and Lèon's performance is this dance, as I was, and still are mesmerized by the dance movements and the rythm in Stein's reading of the poem. Click here for "Shutters Shut"
Posted by Adelheid at 14:20