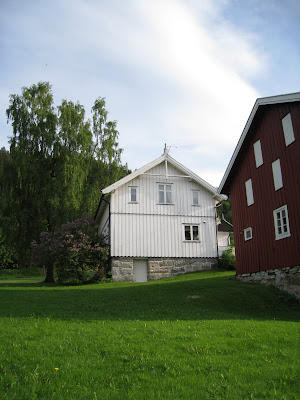 As you might already have guessed, today's photo is of a farm. But not any farm. At this farm, Portåsen, the famous poet Herman Wildenvey was born. Many of his poems are about Eiker, especially the forest and streams around Portåsen. As I wrote yesterday, earlier this year we celebrated the establishment of the two municipalities, and last weekend there was another celebration that took place here in Nedre Eiker. Herman Wildenvey's birthplace and childhood home has been renovated and restored and had its grand opening last weekend, as a celebration of his birth, also 125 years ago. I was still in Paris when Portåsen re-opened, so this photo is taken before the renovation. A photo of the new Portåsen will come!
Posted by Adelheid at 15:49